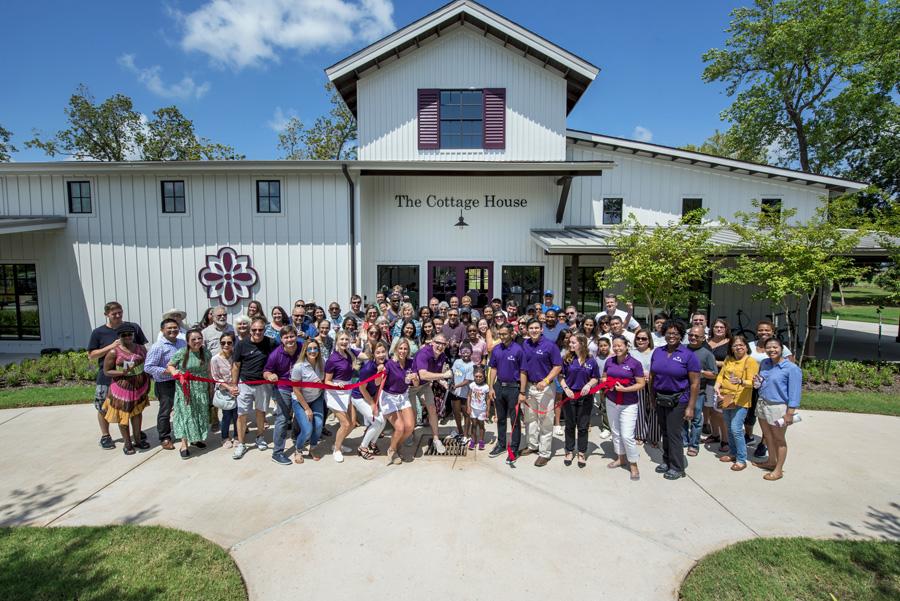 Hundreds of the earliest residents in Richmond’s Veranda community gathered recently to commemorate their pioneering spirit and the spirit of those in the past.

Johnson Development, developer of Veranda, invited the residents to enjoy some champagne and take part in the ribbon-cutting ceremony for The Cottage House, a recently completed recreation complex in the community. Unveiled during the ceremony were 300 brick pavers connecting the pool and clubhouse that were dedicated to the first 300 families who moved into Veranda. The pavers pay tribute to the Old Three Hundred — the first 300 settlers who came to Texas, some who settled in the region. Richmond was one of the first 19 cities incorporated in the Republic of Texas in 1837.

“From the very beginning, we have embraced the area’s rich Texas history,” said Trey Reichert, Vice President and General Manager of Veranda. “The very name of the community comes from a Richmond boarding house opened in 1837 by Jane Long, known as the ‘Mother of Texas,’ that was named The Veranda Hotel.”

Each family had the opportunity to inscribe their paver.

“Our paver has ‘Bill and Judy Tran — Jesus Loves Us’ because we have everything because we have God and we wanted to share that with friends and neighbors,” Bill Tran said.

Tran, who is a financial manager for Johnson Development and set up the accounting for Veranda when development first started, said he and his wife attended the community grand opening in April 2017.

“She was so impressed she said we’re going to live here,” he said. Six months later, they did, moving in to their new home in October 2017.

“Veranda is amazing,” he said. “We know all of our neighbors and are very grateful for them.”

Pinky Richards, who also moved to Veranda in October 2017, agrees with Tran regarding friendly neighbors.

“Everyone seems so happy,” she said. “We absolutely love it here.”

Richards’ paver is inscribed with her and her husband’s name, Pinky and Kermit Richards.

“We thought this was really unique to do, it was really nice for Veranda to do this,” she said.

The 5,095-square-foot Cottage House is a community focal point and anchors the family-friendly pool that opened last year. The facility includes a 1,500-square-foot cardio and circuit-training room with a massage suite, a multi-purpose meeting room, covered patio, reception area and a mezzanine play area.