As what can sometimes happen during residential development, some existing trees do not survive — even despite thoughtful measures to save them.

This happened in the Johnson Development community of Veranda — but instead of cutting the five trees down, community developers made a surprising decision and turned the trees into works of art.

Consideration of existing trees in the community was a focus during the development’s earliest stages, with arborists brought out to determine which trees had the best chances of survival. One tree — a towering pecan located near Wildwood Park Road just east of Veranda Trails Parkway — was not in good health, but because of its age, which is estimated to be over 100 years old, Johnson Development planned infrastructure away from the tree and instead created a large, open space reserve around it in hopes of saving it.

“We tried our best to save what we could, but there are a lot of items that factor into the survival of trees and some of them just do not make it,” said June Tang, Development Manager for Veranda.

Tang remembered reading about a wood carver years ago and decided to save the tree in a different way.

“I read about James Phillips when he carved fallen trees and stumps in Galveston after Hurricane Ike 12 years ago,” she said. “He left an impression on me, so we sought him out.”

Phillips, who has been carving trees for 15 years and full time for seven, took advantage of the tree’s 5- to 6-foot diameter to design a playful sculpture of children climbing on and sitting around the tree. What was originally supposed to be 10 feet high ended up reaching 14 feet. 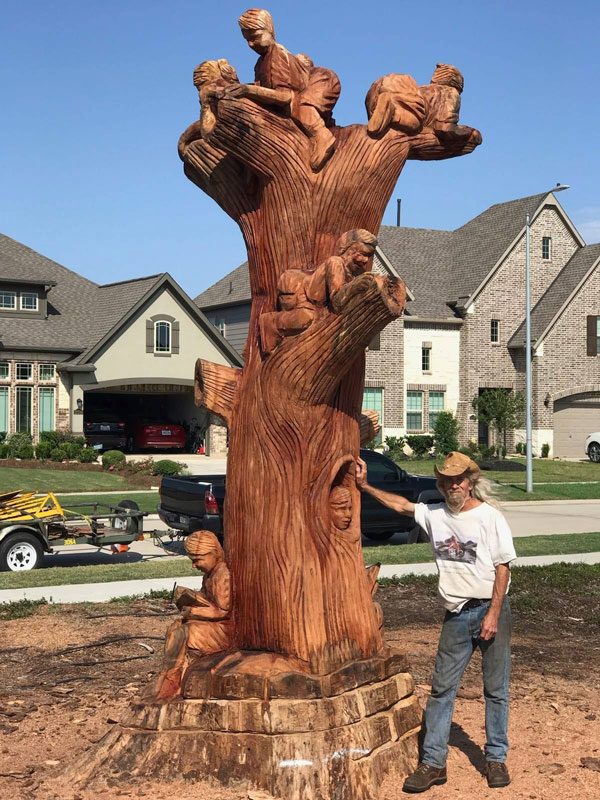 “There’s a lot of work to do when the tree is that large,” Phillips said. “You’re 12 feet up working with a 36-inch chainsaw to rough out the design and you can’t fully see what you’re doing because the tree is so big.”

Phillips estimates he spent 126 hours carving the one tree, using first the large chainsaw before scaling back to smaller chainsaws and eventually an electric saw with tips that allowed for fine detailing. When the carving was complete, he finished his creation with spent motor oil. 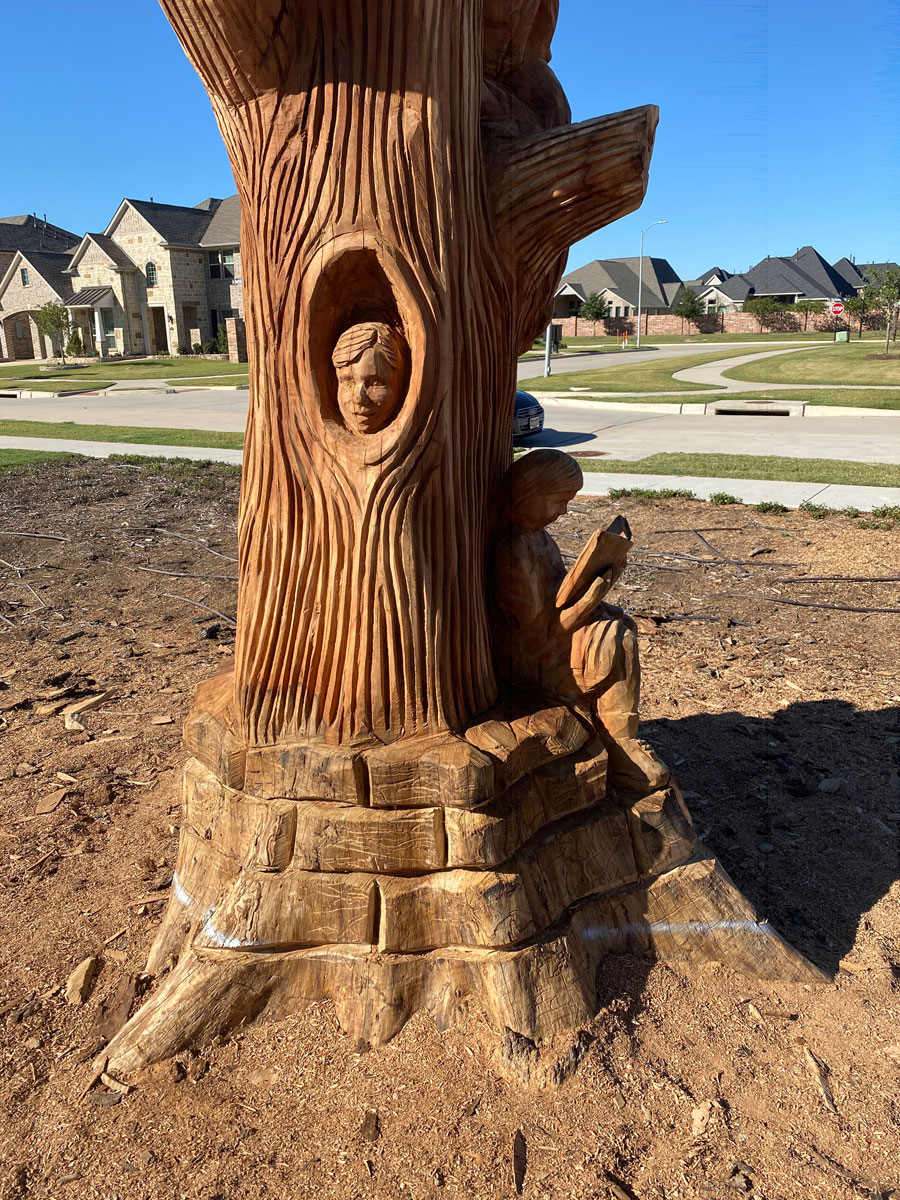 “The spent motor oil is a gorgeous chocolate brown that works beautifully on the wood, especially pecan,” he said.

Phillips said many residents stopped by to watch him work.

“People are always curious when I do my work,” he said. “Groups of neighbors would come along to watch and then would leave together talking about it — that’s community.”

After finishing the first sculpture, Phillips spent more than two weeks at The Cottage House — Veranda’s recreation center — to carve four smaller pecan trees. The trees featured a variety of birds, including an intricate peacock and two herons. 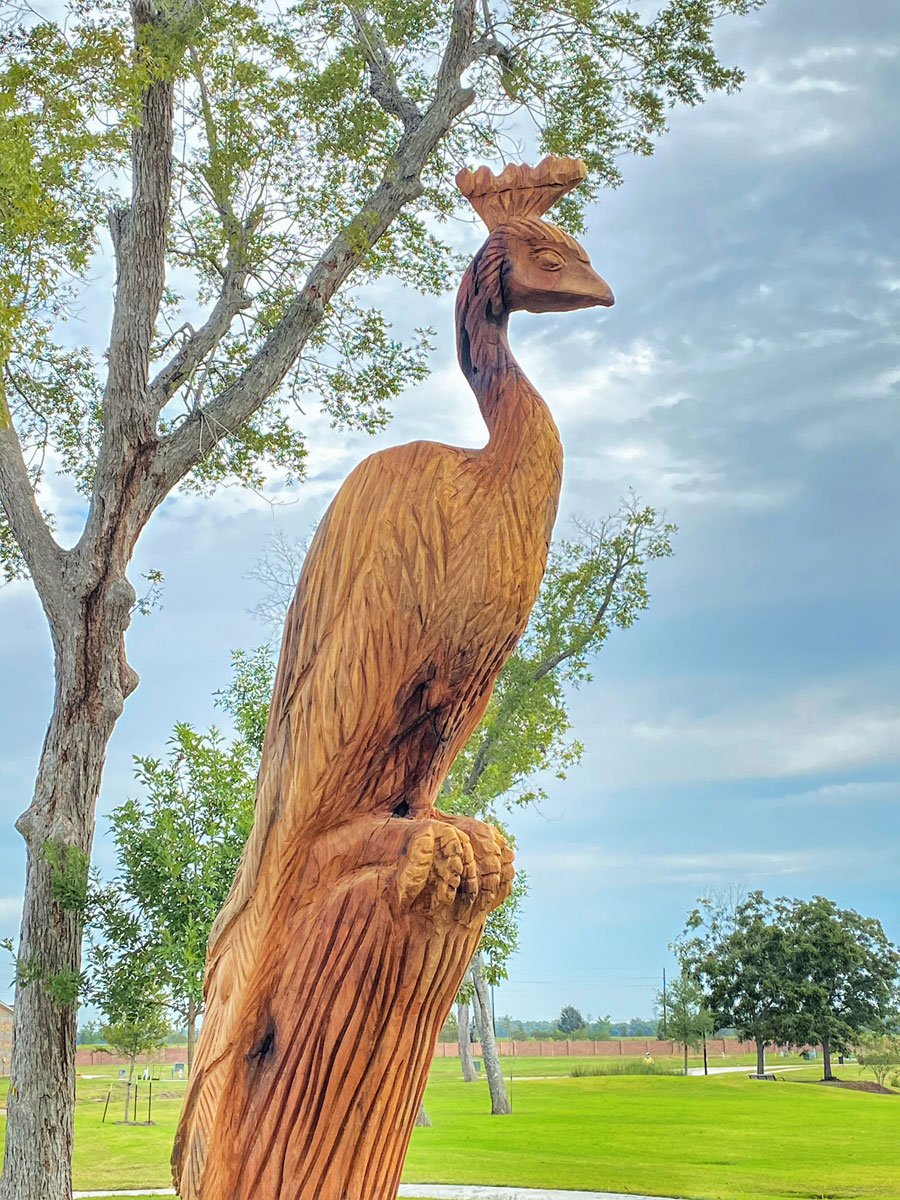 “It’s incredible to see these works of art — it looks like he made ice sculptures out of pecan trees,” said Pat McDonald, President and Chief Executive Officer of The Henderson-Wessendorff Foundation, which sold the land to Johnson Development for the development of Veranda. “I’ve been involved with this land and with this project for many, many years and I’m so pleased with the direction Johnson Development has taken with Veranda. We were looking for someone to protect and enhance the legacy established here by the Henderson and Wessendorff families, and this is just one way they continue to do just that.”